The Boy Scouts: A Case Study in Compromise 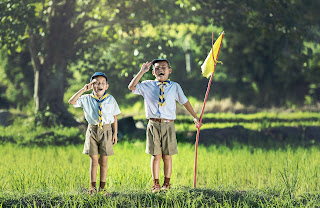 Gone is the Judeo-Christian ethic that guided scouts back in Teddy Roosevelt's day. Now, it's moral free-for-all that's been reduced to: believe whatever you want -- just be nice to people. Back when the BSA made their first concessions, the organization's leaders promised to stay true to their mission. But, as Rob pointed out, every scout pledges, "'On my honor, I will do my best to do my duty to God and to my country.' What kind of honor is there in an organization that for decades has refused to address pedophilia and sexual abuse in its ranks? And what kind of honor is left when you have compromised your basic mission of defining what good manhood is, what leadership is, does character matter? These are things that have been abandoned."

When the pressure started coming for the scouts to walk away from their biblical roots, the organization lost the courage it spent a century teaching. If they'd have abided by their own oath, they would have told the bullies in corporations and on the Left, "We're going to stand for what's right. And if we lose, we'll go down fighting because we're men of principle. And principles don't change." Instead, Rob shook his head, the very thing that made scouting unique -- its sense of conviction and principle -- was tossed aside for the sake of appeasing a crowd who, ironically, cannot be appeased.

Now, having alienated everyone, the Boy Scouts are financially ruined and publicly scorned. And for what? An increasingly irrelevant organization that can't even define its own terms. Just this month, the scouts' nosedive continued when it agreed to one of the largest sex abuse settlements in American history -- another humiliating chapter in a decade of disasters. When all is said and done, even the Boy Scouts won't have the survival skills to weather this kind of storm.

And unfortunately, that's the destiny of any Christian who takes the naïve view that the world can be placated. It can't. True love, I Corinthians 13:6 tells us, is truth. It's being salt and light in a draining, unforgiving culture. "Come out from them and be separate," Paul said, because he understands that in the end, it's not our sameness with the world that transforms people. It's our distinction.