Prayer is foundational; prayer is not supplemental. God’s people need to learn to pray. We miss so many things necessary for the spiritual victory that God would gladly provide if we would come to Him in prayer. If the church wants to succeed in its God-given mission, its leadership must realize that one of its greatest needs is more prayer meetings, not more planning meetings. If the monthly leadership meetings would give more time to praying than to planning, leaders would soon find changes in attitude, in perspective in ministry, and in results.

– Donald McDougall, Pastoral Ministry: How to Shepherd Biblically
Posted by Rhett Wilson at 7:27 PM No comments:

Email ThisBlogThis!Share to TwitterShare to FacebookShare to Pinterest
Labels: Prayer and Intercession, Quotations 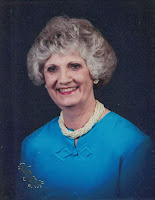 I am thankful today as I reflect that 50 years ago you and Dad were married. I looked on the internet and found that in 1961 postage stamps cost 4 cents, JFK was inaugurated, Carry Back won the Kentucky Derby, West Side Story was adapted for the big screen, and Patsy Cline released her song Crazy!

I think of a lot of people who would have been at your wedding – Mom-ee and Pa-Pa, Frances and Emily, Dad’s parents, and high school and college friends.

Lots of good memories come to my mind. Many more than can be penned. I am thankful for the security of my childhood home that gave me the foundational grace and strength to stand through the storms of life as an adult. You all instilled in me that family was very important. I never doubted if you and Dad loved and cared for me. You took time to develop a relationship with me and eventually with my friends. I knew that I was a vital part of your lives – not just someone passing through. You and Dad both took time to spend with me and let me know that I was important. And you both communicated your love for me, of which I am grateful. As I became a pastor and began working with men, it surprised me to discover how many grown men have never been hugged by their father nor ever been told the ever-important words from their father, I love you. I cannot recall one night I lived with you and Dad that you both did not touch me and tell me that you loved me.

You all instilled in me the need to love and respect God, to believe His Word, and to be involved with the church. We talked about the Lord, the Bible, and church so often around our supper table. I distinctly remember you and I sitting one dark night at our kitchen table in Henderson with a children’s story Bible while you told me the story of Old Testament Joseph. The lesson from his life, that God is always with us, has carried me through many highs and lows in my adulthood. I have so many pleasant memories related to church and our friends from church. Those were great, happy times for me that I enjoy recalling and reliving in my thoughts. I remember your impacting my friends in high school as you taught the girls in Sunday School.

I remember so many wonderful holiday memories – Easters, birthdays, anniversaries, Halloweens, Thanksgivings, and Christmases. The house was always ablaze with Christmas decorations in December. I remember enjoying our advent season, particularly when school got out and we were home.

You also modeled for me to have a lifestyle of showing compassion to other people and to use your life to serve your fellow man. I saw in you that life was not just about making self happy but about reflecting God and giving to others. Many times I can recall your taking time to share what you had with others and get involved in their needs.

You worked so hard to provide for me. I know that was very difficult at times, and it did not go unnoticed. Thank you for the sacrifices you made in order to give me a good start on life. In part it gave me a great sense of responsibility to make good choices and invest my life wisely. According to the Gallup organization’s StrengthsFinder, one of my top five natural strengths is “responsibility.” I know you modeled that well for me.

You all embraced Tracey when she won my heart, and you both showed interest and love for her. And when our children came along, you exhibited great love and joy for them. It has brought me much pleasure through the years to see the joy that you all had in our children. I distinctly remember all of us being together at the hospital when Hendrix was born. A snapshot in my memory is walking out of the operating room holding Hendrix with you, Dad, Karen, and Ray looking on. Anna-Frances has so enjoyed spending time with Amma. Moose Keller told me a few years ago that Dad’s daily topic of conversation at breakfast was “Dawson.”

Finally, you specifically exhibited two qualities worth remembering. One, you prayed so consistently for my life, my friends, and eventually my own family. Thank you for your labor of love and ministry of intercession. I have no doubt that your prayers enabled me to make many good choices and have a relatively smooth voyage into adulthood. I value your prayers for my children as they grow up in a culture hostile to the Judeo-Christian value system. And two, you modeled for me perseverance in the midst of trials and disappointments. You were often like the Energizer Bunny that took a licking but kept on ticking! As Twila Paris sang, the warrior is a child who keeps running back when she falls down. You showed me how to cope with difficulty, trust God in the face of heartache, and hang on when your world is shaken. Those are very important qualities worth remembering.

Happy Anniversary! I am glad that you all were my parents.

Rhett
Posted by Rhett Wilson at 11:00 AM No comments:

Since last fall, Newt Gingrich has been my choice for the Republican nominee for President. I wonder if he has not been prepared by the Almighty his entire life to lead our country for such a time as this. Currently, Newt leads the polls.
Posted by Rhett Wilson at 7:44 PM No comments:

Don't know where this started, but it is so funny!!! A letter from a Boy Scout at camp to his mother . . .

Our scout master told us all write to our parents in case you saw the flood on TV and worried. We are OK. Only 1 of our tents and 2 sleeping bags got washed away. Luckily, none of us got drowned because we were all up on the mountain looking for Chad when it happened. Oh yes, please call Chad's mother and tell her he is OK. He can't write because of the cast. I got to ride in one of the search & rescue jeeps. It was neat. We never would have found him in the dark if it hadn't been for the lightning.

Scoutmaster Webb got mad at Chad for going on a hike alone without telling anyone. Chad said he did tell him, but it was during the fire so he probably didn't hear him. Did you know that if you put gas on a fire, the gas can will blow up? The wet wood still didn't burn, but one of our tents did. Also some of our clothes. John is going to look weird until his hair grows back.

We will be home on Saturday if Scoutmaster Webb gets the car fixed. It wasn't his fault about the wreck. The brakes worked OK when we left. Scoutmaster Webb said that a car that old you have to expect something to break down; that's probably why he can't get insurance on it. We think it's a neat car. He doesn't care if we get it dirty, and if it's hot, sometimes he lets us ride on the tailgate. It gets pretty hot with 10 people in a car. He let us take turns riding in the trailer until the highway patrolman stopped and talked to us.

Scoutmaster Webb is a neat guy. Don't worry, he is a good driver. In fact, he is teaching Terry how to drive. But he only lets him drive on the mountain roads where there isn't any traffic. All we ever see up there are logging trucks.

This morning all of the guys were diving off the rocks and swimming out in the lake. Scoutmaster Webb wouldn't let me because I can't swim and Chad was afraid he would sink because of his cast, so he let us take the canoe across the lake. It was great. You can still see some of the trees under the water from the flood. Scoutmaster Webb isn't crabby like some scoutmasters. He didn't even get mad about the life jackets.

He has to spend a lot of time working on the car so we are trying not to cause him any trouble. Guess what? We have all passed our first aid merit badges. When Dave dove in the lake and cut his arm, we got to see how a tourniquet works. Also Wade and I threw up. Scoutmaster Webb said it probably was just food poisoning from the leftover chicken, he said they got sick that way with the food they ate in prison. I'm so glad he got out and become our scoutmaster. He said he sure figured out how to get things done better while he was doing his time.

I have to go now. We are going into town to mail our letters and buy bullets. Don't worry about anything. We are fine.

Love, Cole
Posted by Rhett Wilson at 7:37 PM No comments:

Why Gingrich Could Win

Read it here from the Wall Street Journal.
Posted by Rhett Wilson at 11:36 PM No comments:

4 Mistakes I Made as a Dad by Thom Rainer
Posted by Rhett Wilson at 7:58 PM No comments:

Many folks believe the lie that pastors are not allowed to endorse or oppose political candidates.

Read the Political and Legislative Guidelines for Pastors and Churches.

Read the article, Pastors, Churches, and Politics to learn more about our freedoms!
Posted by Rhett Wilson at 1:37 PM No comments:

Since the beginning of this year, Newt Gingrich has been my choice for the Republican nominee. Read about his 21st Century Contract with America.
Posted by Rhett Wilson at 5:27 PM No comments:

If when God said "Go," you stayed because you were so concerned about your people at home, you robbed them of the teaching and preaching of Jesus Christ Himself. When you obeyed and left all the consequences to God, the Lord went into your city to teach; as long as you would not obey, you were in the way. Watch where you begin to debate and to put what you call duty in competetion with your Lord's commands.

- Oswald Chambers
Posted by Rhett Wilson at 12:03 PM No comments: