Franklin Graham: American Freedom Is Being ‘Defeated From Within’ 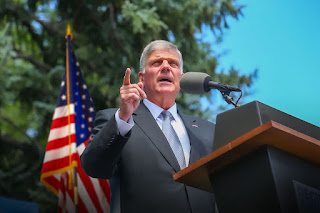 "As we come to Independence Day and commemorate our freedoms, we shouldn’t celebrate too quickly. We need to look seriously at what is happening around us. We are losing our freedom and we are being defeated from within—and no one had to fire a shot.

It takes a North Korean defector to point out a common thread in North Korea’s education system and ours—communism.

As many news outlets reported, Yeonmi Park fled to America with her mother to escape oppression and later enrolled in an Ivy League school. She was excited to attend this prestigious university that was supposed to help her think independently and expand her horizons. However, she has been shocked at what she found.

The educational institution indoctrinated students with anti-American propaganda. She found deeply troubling similarities with the country she had fled from in search of freedom. Those similarities include anti-Western sentiment, collective guilt, and suffocating political correctness, including mocking her for enjoying English literature classics such as Jane Austen."