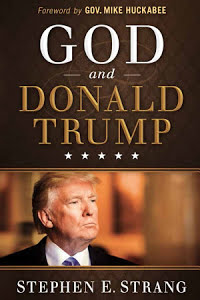 Stephen Strang’s book, God and Donald Trump, kept my attention from the first to last page. The author, an award-winning journalist and CEO of Charisma Media, looks at the 2016 election of Donald Trump through the lens of many evangelical Christians. The record-breaking election included the highest ever turnout of evangelical Christian voters in a presidential election. Similarly to the election of Ronald Reagan, evangelical voters comprised a significant block of Trump voters.

The book looks at issues related to what made Trump appealing to Christians. After eight years of Barack Obama’s presidency, which included the most leftist political agenda in our nation’s history – and what some argue as the most corrupt one - the fear of Hillary Clinton’s sealing the change Obama promised motivated evangelical Christians to try and stop the tide of the left.

Donald Trump’s “get ‘er done” attitude, his plain-spokenness, his economic savvy coupled with common sense, the emphasis on family, his taking on the Left and leftist media, and his promise to protect religious liberty and appoint conservative judges to the federal courts and the Supreme Court resonated with many Christians. The Obama administration saw the rise of many left-wing judges and the most hostile presidential administration to conservative, evangelical Christians in our history.

Strang includes the transcript of his own interview with Trump. The author attempts to show the man behind the red tie, including his roots, his family, and his evolving faith and relationship with Christianity.

The well-documented book includes quotes from a variety of sources.

Strang tackled head-on the reality of Trump being an unlikely candidate to win the support of Christians. One of the most telling parts of the book is Strang’s comparison of Donald Trump to a George Patton, Abraham Lincoln, or Winston Churchill:

None of these men were conventional Christians, and they had many detractors in the clergy, yet each played a pivotal role in history. They stood strong against the enemies of freedom and helped safeguard our way of life and our Christian heritage.

Patton was no choirboy, but he was a strong-willed and powerful man who trusted in the authority and compassion of a powerful God. Donald Trump, with his swagger, cocky self-assurance, and ruthless determination, may well be the George Patton of our age and the one man who could stand up to the leftist insurgents who have done so much damage to the republic over the last fifty years. His language and behavior may be disagreeable, but he possesses an undeniable passion to make America great again, and the people have responded to his message.

The Bible character of Samson was an unlikely choice for God to use as His tool. The unethical, sensual brute delivered the Israelites from the Philistines. Many evangelicals believe Donald Trump was a Samson-like tool to protect our nation from falling off the cliff in the disaster of a Hillary Clinton presidency.

Gordon Robertson, CEO of The Christian Broadcasting Network , says, “If you woke up the day after the 2016 election wondering ‘What just happened?’ then this is the book for you.”

Governor Mike Huckabee writes in his forward, "Knowing who to vote for doesn't come easy for the Christian, and this past election was no different. Since his election I'm encouraged by the way Trump has surrounded himself with a number of evangelical Christians."

And Alveda King says, "This must-read book reaches far beyond politics into the redeeming frequencies that America surely needs."


Read my 2016 article, Why a Southern Baptist Pastor Will Vote for the Unvirtuous Donald Trump here.