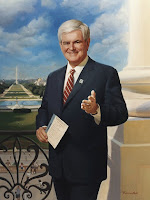 "There are a scattered handful of traditional liberal Democrats in the House and Senate, but none have any chance of ever being a national candidate in the emerging Democratic-Socialist Party.

We are watching a historic moment in which a once-great American party is transformed into an anti-American engine of radical change. In 2020, every Democratic candidate will be faced with the challenge of defending a national party which is now the Democratic-Socialist Party.

It will be a wrenching, defining moment for the party of FDR and JFK as it is conquered by the party of AOC, Sanders, and Warren."

Picture is in the Public Domain.