Walk with Jesus Tuesday: The Three Legs of the Stool


The Lord created us for healthy relationships.  God created humanity first to enjoy a relationship with Him.  Paul wrote that God, who has called us into fellowship with His Son Jesus, is faithful (1 Corinthians 1:9).

The natural overflow of a healthy walk with God is healthy relationships with other people.  The testimony of the early church shows that it was the regular habit of believers to come together two different ways weekly.

Every day they continued to meet together in the temple courts.  They broke bread in their homes and ate together with glad and sincere hearts (Acts 2:46).

First, they worshiped together in a large-group environment, most likely for preaching and gathering for songs and prayers.  However, they almost met - sometimes daily - in homes in what we would call "small group meeting."  One home would only house a few families.     These smaller gatherings became the place for people to get to know each other, share life together, laugh, pray and encourage one another.

Some believers today avoid going to church with other Christians, thinking, "I can worship God on my own and listen to great preaching online or on the television."  Yes, you can.  But, the example of Scripture is that believers are to come together.  Jesus promised His presence when two or three gather - not just when we watch others gather via our computer.  When the early church gathered to pray, the Bible says that the place was shaken.  There is an element of the manifest presence of God that He reserves for corporate worship.

Other believers worship corporately but do not involve themselves in small group settings, whether that be a Sunday School class, a prayer group, or a small meeting for Bible study, encouragement, or accountability.   However, it is in those settings where lives touch other lives face-to-face, where relationships and bonds are formed, strengthened, and oiled, and where people feel connected.

Studies have shown for years in churches that individuals who do not get connected in some type of small group setting will not likely stay connected to the church long-term.

I observed this once in my ministry.  Two couples attended the church for more than a year.  Both couples attended a potential-members class.  I later had conversations with the husbands from both families.  One told me that they did not feel like they knew how to get connected on the inside of the church.  They did not think that people would allow them to come in on a deep level.  They felt like people would not allow them to be involved.

Two days later, the man from the other family initiated a conversation with me.  He told me how deeply loved they felt in our church, how they have never known a church that was so inviting, and that he has told his wife several times, "This church has showed us what church is really supposed to be about."

Two very different conversations and outcomes.  In reflecting on the comments, one reality stood out to me.  The first couple came to worship but did not get regularly involved in any Sunday School class nor small group.  Their primary connection was the Sunday morning worship experience.  They attempted to serve in a few capacities but without getting connected in a small group setting.  The other couple, however, dove deeply into the Sunday morning Life Group (Sunday School) class - and the man got quickly involved in a men's small group that meets weekly.  He and his wife jumped headfirst into both of those experiences.  The result?  They felt deeply connected, very valued, and sincerely loved and wanted.

God made some things simple.  The key to feeling those things described by the second man is involving ourselves with other believers in a small group setting - building some authentic relationships.  I have noticed through the years that some Christians have a tendency to "lean away" from face-to-face relationships in small groups.  I believe the model of the New Testament, however, is that healthy Christianity requires that we "lean in."  As one of the deacons in our church says regularly, we need a place where we can come and lay aside our false faces - and allow other people to love and encourage us.  There is a balm that comes from participating in a group that I do not control but that allows me to come in and relate just as I am. 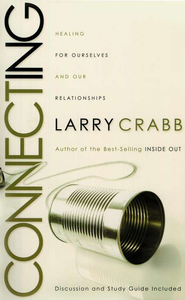 Larry Crabb describes it this way: Maybe the center of Christian community is connecting with a few.  It's time to consider a radical understanding of "going to church" that centers on releasing the power to change lives that God has placed within every member of the Christian community, a community that Christ calls his body a community made up of lots of people connecting to a few others. . . .  [M]y prayer is that "going to church" will become the most important activity of our lives, the activity of building healing communities of a connected few.  (Connecting: Healing for Ourselves and Our Relationships)

Years ago I heard a Navigator missionary share that a healthy Christian life required three things, like the three legs of a stool.  Every Christian needs a one-on-one time with the Lord - often called the quiet time or devotional life.  Then, a believer needs to worship regularly in a large-group setting with other Christians.  And thirdly, believers need to engage with other Christians in a small group setting weekly.  To have only one or two legs of the stool will make it unbalanced.  All three, however, lead to a firm foundation.

Spend time with God daily.  Worship with other believers corporately.  And build relationships in small group settings.  Those are healthy connections.
Posted by Rhett Wilson at 10:36 AM

Email ThisBlogThis!Share to TwitterShare to FacebookShare to Pinterest
Labels: Walk with Jesus Tuesday