In one of the most comprehensive rebukes of cancel culture in recent memory, a court in the United Kingdom affirmed April 1 that Christians and people of other faiths who hold traditional religious views about marriage and human sexuality are entitled to protection under the law. 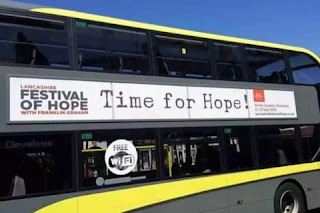 Judge Claire Evans found that the defendants—the Blackpool Borough Council and its public transportation company—violated the U.K.’s Equality Act 2010 and discriminated against the Lancashire Festival of Hope with Franklin Graham when they removed bus advertisements for the event in response to complaints from the LGBTQ community about Franklin’s Biblical view of marriage. Evans said that the defendants’ actions were “the antithesis of the manner in which a public authority should behave in a democratic society.”

The judge noted that sincerely held religious beliefs about marriage, which are characteristic of Christianity and other religions, do not make the individuals or organizations that hold them “extremist.”