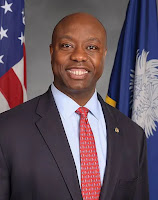 Senator Tim Scott (R., S.C.) on Thursday morning slammed critics of his response to President
Biden’s address to a Joint Session of Congress, saying the Twitter trend “Uncle Tim” shows that the American left is committed to a racialized politics that leaves no room for good faith disagreement.

“It has been an amazing morning with so many good people calling, but the left has doubled down,” Scott said Thursday during an appearance on Fox News. “. . . You cannot step down out of your lane according to the liberal elite left.”

Scott called the trend on Twitter, which took off Wednesday night and early Thursday morning, “upsetting” and “so disappointing.”

Read the entire article here by Tobias Hoonhout at the National Review.