The Hidden Lives of Presidents: the Eyes of the Secret Service


“Hillary smiles and acts graciously [when in public].  As soon as the cameras are gone, her angry personality, nastiness, and imperiousness become evident.”


“She is also nasty to the little people she professes to care about.”


“She is a totally different person behind the scenes than what you see when she is being interviewed.” 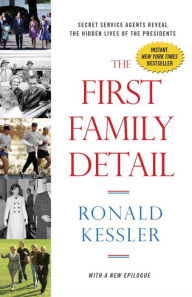 Kessler shares numerous stories collected from interviews with a variety of SS agents.  Incidents and memories abound all the way back to the days of JFK and LBJ.  The author gives a behind-the-scenes look at the attitudes, actions, and integrity – or lack of it – from some of America’s leading figures.

Many of the Presidents, VP’s, and their families were difficult to guard.
Did you know that LBJ used to strip down to his underwear or completely naked when he would get into the stateroom on Air Force One, regardless of who was around?

Johnson, who publicly claimed to be a champion for minorities, called them “niggers” in private.  When discussing the importance of his civil rights bill with two governors, he said, “I’ll have them niggers voting Democratic for two hundred  years.”

The SS considered Nancy Reagan difficult to work with.  Precise and demanding, she “stage-managed” her husband, who the SS agents considered down-to-earth and good-natured.  The agents found Nancy aloof and cold.

While Jimmy Carter liked to appear compassionate publicly, behind the scenes “it was a different story.”  One charade was to appear to carry his own luggage when traveling.  He carried his bags when the press was around – but the bags were completely empty!  It was a ruse to make him look good.

Unlike Carter, agents found that “Ronald Reagan was the same decent, affable man in private that he appeared to be in public.”

Kessler saves his harshest criticism for none other than Hillary Clinton.  One agent says, “There’s not an agent in the service who wants to be in Hillary’s detail.  If agents get the nod to go to her detail, that’s considered a form of punishment.”

Kessler writes that her nastiness and contempt for law enforcement have earned her “the distinction of being considered the Secret Service’s most detested protectee.”  Hillary exudes a decades-long, off-camera disdain for law enforcement, military, and security agents.

She looks down on the agents like they are servants.  She cusses at SS drivers.  One agent who spent years guarding her said, “Hillary did not speak to us.  She never said thank you.”

What Kessler and SS agents do reveal is a woman who is completely different on screen than in real life:

“Hillary was so mistrustful and vengeful,” one former agent says.

One agent recalls his time in the Clinton White House: “If Hillary was walking down the hall, you were supposed to hide behind drapes used as partitions.”

She had a standing rule that no one spoke to her while going from one location to another.  Anyone who saw her coming would step into the first available office.

One long-standing agent recalls that "[m]ost all members of first families would talk to us and smile.  She never did that.”

In contrast to Hillary, Kessler writes how much respect the SS had for both Bush couples and Ronald Reagan.  Those leaders treated their staff and the SS with much respect, grace, and dignity.

For example, Patrick Sullivan recalled how Barbara Bush gave him one of her husband’s furry hats when he was guarding them in the winter.  Sullivan remembers, “That was Mrs. Bush.  She was everyone’s mother.  She was a sweetheart.”

Unlike Hillary, who curses at SS drivers if they get lost or take a wrong turn, Lady Byrd Johnson would simply say something like, “My, my.  I don’t think I’ve ever been this way before.”  Kessler writes, “She was gracious and respectful to the agents.”

And what about Laura Bush?  Kessler writes that though agents think highly of her husband George, "it is nothing compared to their feelings about his wife."

One agent described how caring was Laura, who talked to him for half an hour one Christmas and seemed apologetic for taking him away from his family.  Another agent says, "Laura has the undying admiration of almost every agent.  I've never heard anything negative about Laura Bush.  Everybody loves her to death."

In his senior years, the senior President Bush learned that a two-year old son of an agent on his detail lost his hair in treatments for leukemia.  Bush had his own head shaved and donated to a fund to help the medical costs.  Bush said, "I said, why not me?  It was the right thing to do."

Kessler writes that today, "[A]gents say he and Barbara Bush are as considerate of them as ever."

Those things still matter in a Presidential couple.

And Hillary Clinton is one woman who does not have the temperament to be the President of the USA.
Posted by Rhett Wilson at 3:19 PM