Time for a Laugh


The following is my article from my column today in The Clinton Chronicle:

The news has been so serious lately.  We all need a good laugh or two.

Charles Dickens wrote, “There is nothing in the world so irresistibly contagious as laughter and good humor.”

My grandfather, an old-school Baptist preacher, told the story of two old men at the assisted-living facility.  Fred and Elmer sat in chairs in the hallway for most of the afternoon.  They watched and occasionally talked as people walked back and forth.  One elderly lady slowly walked past them on her walker, wearing only a hospital gown, which was untied in the back.  As she rambled past them, they stared.  Momentarily, Fred asked, “What was that?

Elmer casually replied, “I don’t know, but it sure did need ironing.”

In this political season with such strong opinions and convictions bellowing, maybe we need to remember this word from Robert Frost: “If we couldn't laugh we would all go insane.”

Gary and Clovis grew up together in the country.  Gary grew up to become a farmer, and Clovis got some education and began teaching at a local college.  One day these old friends were walking down a country road together.  They passed a field of cowboys and horses.  Clovis stated, “Look, Gary, those men are bow-legged!”

Embarrassed, Gary decided to help his friend.  “Clovis, you shouldn’t talk like that.  You need to learn to talk in a more sophisticated manner.  I tell you what.  For the next month, I am going to help you improve your vocabulary.”

Clovis submitted, and for the next month he endured Gary’s assignments.  The two friends read several of Shakespeare’s plays together. Dr. Henry Higgins would have been proud.

One month later, after much study of the finer words in the English language, the two friends walked down the same country road together.  When they approached the field of cowboys that began all of this schooling, Clovis thought, “I’m going to impress Gary with all of this learning.

Clovis suddenly exclaimed, “Behold, Marn!  What manner of men are these, that walk with their legs in parentheses?”

One of my favorite preachers of the 20th century was Adrian Rogers, who was known for his one-liners.  Here are just a few:

“Do you know where Greece came from?  It oozed out of Turkey.” 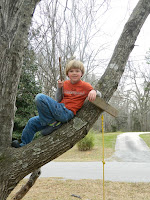 “To pastors who borrow from my sermons: If what I preach fits your gun, then shoot it.  But use your own powder.”

Charles Swindoll says, “When we lose our ability to laugh – I mean really laugh – life’s oppressive assaults confine us to the dark dungeon of defeat.”

God is on His throne.  The One who cares for the birds and the flowers is able to see to the details of our lives.  He can still be trusted.  And that frees us to keep laughing even when life doesn’t go our way.
Posted by Rhett Wilson at 8:00 AM