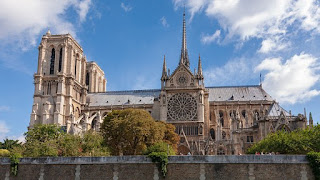 "The symbolism of the burning of Notre Dame Cathedral, the most renowned building in Western civilization, the iconic symbol of Western Christendom, is hard to miss.

It is as if God Himself wanted to warn us in the most unmistakable way that Western Christianity is burning — and with it, Western civilization.

Every major Western (and one major non-Western) social and intellectual force has conspired to rid Europe of Christianity and the civilization it produced."