Franklin Graham: We Must Not Remain Silent 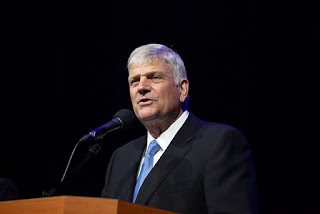 "As the progressive, secular left movement continues its toxic spread across our nation, there is little doubt that its primary objective is not only to suppress Christians and the Biblical worldview, but to harshly punish and completely silence our moral voice and values.

That was never more evident than with the treatment of Karen Pence, wife of Vice President Mike Pence, as she was savagely attacked by the media—even international pundits—for her part-time role as an art teacher at a Christian school in suburban Virginia.

Mrs. Pence had taught for 12 years at the school, which like most evangelical Christian schools in America, affirms traditional, Biblical marriage between one man and one woman, with clear definitions of sexual identity according to Scripture. These are the solid, moral foundations that have undergirded civilizations for millennia."