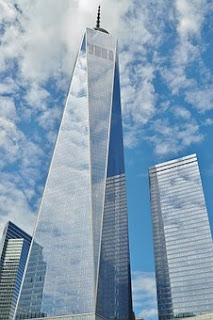 "It should have been blood red, like a warning. Crimson, like a siren -- or STOP. Instead, the spire of New York's One World Trade Center was lit up in it's-a-girl pink, a 408-foot reminder that the law it celebrated will mean fewer daughters, fewer mothers, fewer chances. From miles away on Wednesday night, people could see the tower flashing in the dark sky, announcing the arrival of a new evil in the war against America's children.

On the streets below, some New Yorkers shuddered. It was one thing for state leaders to carry out their threat against the unborn, and another thing altogether to revel in it -- cheering wildly as Governor Andrew Cuomo (D) signed the warrant for the execution of more innocents. In a state where the womb was already the most dangerous place for a child, this law begins a new era. Open season on our own. From now on, nothing stands in the way of a woman taking her baby's life -- days, hours, or even a minute before she's born. A fully grown, healthy human baby that thousands of struggling couples would give anything to have.

That's the savagery New York leaders call 'progress.' That's the 'achievement' Cuomo turned into a pink beacon, shining 'a bright light forward for the rest of the nation to follow.' "

Read the entire article at the Family Research Council here.

Picture used by permission from Pixabay
Posted by Rhett Wilson at 1:01 PM