Be watchful, stand firm in the faith, act like men, be strong.  Let all that you do be done in love. 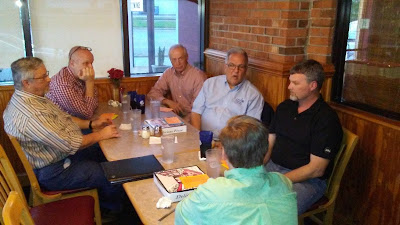 We live in a day that often lacks a clear understanding of biblical masculinity. Society does not offer a strong definition to boys of what it means to be a man.

The examples in pop culture, sports, and politics often show weak and pitiful models of sensuality, selfishness, and foolishness.

However, the church, and more specifically, Christian fathers, can carry the torch of challenging the next generation to be godly men.

So if the Bible challenges us to “act like men,” we should be able to answer definitively, “What is a man?”

Robert Lewis’ excellent work challenging fathers to raise their sons to be godly men influenced me a great deal several years ago. Focus on the Family airs Lewis at least once a year, and I commend his resources to you:

Raising Sons to Be Honorable Men by Robert Lewis

For my sons, I crafted the following definition of manhood (modifying Lewis’ definition and making it my own):

What is a man?

1.  A man reflects God’s image consistently.
2.  A man relates to his family and friends honorably.
3.  A man rejects passivity.
4.  A man accepts responsibility.
5.  A man initiates and influences his culture and world positively.
6.  A man draws his strength from the Lord. 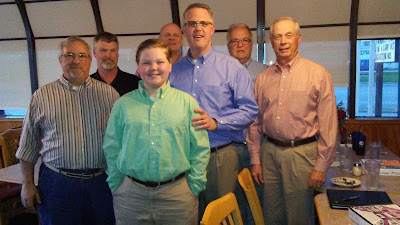 And for the Wilson family, I came up with this acrostic to define manhood:

W – Worthy of the Lord
I – Initiates and influences others for God and good
L – Loves and leads
S – Sharpens his character, skills, and strengths
O - Open to God and meaningful relationships
N-  No to sin, selfishness, and Satan

The concept of teenager never appears in the Bible.  American culture created an entire sub-culture for what we call teenagers, but the Bible speaks only of children and adults, or men and women.

The book of Proverbs, written to young men probably ages 12 and above, challenges these young men to grow up to be godly, wise, and responsible.

Understanding this transition, Jewish tradition practices the bar mitvah. When a boy turns thirteen, the community celebrates this passage, marking the milestone of beginning the slow but sure transformation from boyhood to manhood.

My youngest son Dawson turned thirteen two weeks ago. As part of the rite of passage, I invited several men I consider to be good, wise, godly, and responsible. These men’s lives have intersected with his in different ways.

We gathered for supper at the restaurant of his choice – Milano Pizzeria in Simpsonville, South Carolina. After a great supper and enjoyable conversation, I challenged Dawson with the above definition of manhood. 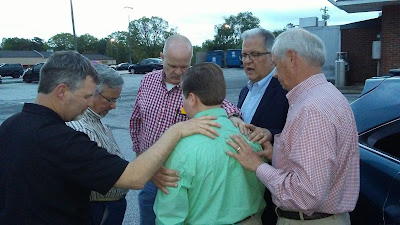 I previously asked each man to prepare a few brief remarks. We went around the table, allowing each man to share Scripture, challenge, and/or exhortation with Dawson about what it means to follow the Lord and become a godly man. What a joy to hear each of them encourage and exhort Him from their lives and from God's Word.

After supper, we gathered around Daws in the parking lot, laid hands on him, and prayed over him.


I hope he looks back on the evening as one more solid memory that encourages and challenges him to be watchful, stand firm in the faith, act like a man, be strong, and let all that he does be done in love.

And, if the Lord tarries, I hope that 200 years from now there will still be Wilson men who know what it means to be godly men and who challenge their sons and grandsons to become such men.
Posted by Rhett Wilson at 11:04 PM