What Robert E. Lee Teaches Us About Reconciliation 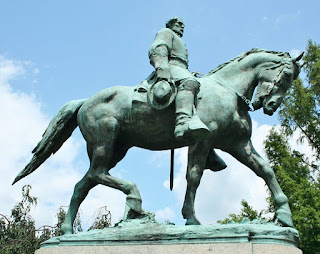 "I have lived in the South for almost nine years now. As a history student for life, I have tried to take advantage of my home in Nashville and learn more about the American Civil War. I also have tried to observe how people from the South talk about the Civil War. Although I don’t live in the deep South, the war seems to be a distant past to most people here. My only fear is that people will forget what happened and more importantly, what we can learn from it.

My father was a member of Kappa Alpha, an 'Old South' fraternity, which was inspired by the gentlemanly conduct of Robert E. Lee, when he served as President of Washington College (later became Washington & Lee). My father as well as my grandfather, who was also a Kappa Alpha member, always spoke fondly of Robert E. Lee. I never quite understood why because of Lee being a General whom led a rebellious army that ultimately lost. Lee did not seem to be a perfect person but why did his soldiers fight so bravely for him and why did they follow him when he agreed to surrender to Union forces? I learned why from a story in the book, April 1865, the author wrote a beautiful ending that captured the scene of Richmond, Virginia not long after the Civil War ended.


It was a warm Sunday at St. Paul’s Episcopal Church, and an older man, one of the church’s many distinguished communicants, who had spent the last four years in war, was sitting in his customary pew. With his shoulders rounded, his middle thickened, his hair snow-white and beard gray, as usual, he attracted the attention of the rest of the church. But then so did another parishioner."

Picture used by permission from Pixabay.
Posted by Rhett Wilson at 10:32 PM