This article continues the Surprised by God series.  Read article one here and article two here. 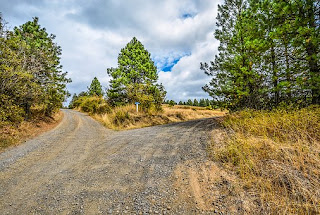 During my college years, I dated a young lady off and on for about three years.  As often happens with dating couples their senior year of college, the question loomed large, "Are we going to get married, or are we just enjoying each other's company as college students?"

We began seriously talking and praying about whether or not God wanted us to spend our lives together.  She was a serious Christian, an exciting person, and I thought she would make a good wife and mother.  We had similar goals in life.  From the world's perspective, and even from the vantage point of many believers, we probably could have experienced a better-than average marriage.

But going into the last semester of my senior year, a growing and nagging lack of peace accompanied my thoughts of her.  This finally culminated in February of that year, when I told her that I was sure that God was not leading us to be married.  It was a somewhat sudden change and surprise to us both, but I believed God had answered our prayers for direction.  After college we parted ways and both pursued careers in Christian ministry.

Don Wilton says that when counseling pre-married couples, he does not just ask them, Do you know that it is God's will for you to marry each other?  That question can be manipulated because of strong emotional attachment.  He asks, instead, Do you know that if you did not marry this person, you would be out of God's will?  That is a much stronger one.

More than a year after college graduation, I still had no future marriage prospects.  Several of my friends were already married or engaged, and it felt like the clock was ticking.  My mother suggested that I reconsider my college girlfriend, but I knew the Lord had closed that door.  Over several months, however, I did begin to consider another woman.  Without question, I knew I wanted a wife who was a serious follower of Christ.  The woman I considered certainly was.  In fact, I could not think of any woman I knew who was any more serious in her relationship with God than her. 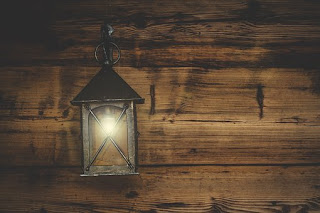 I finally bit the bullet and wrote her a lengthy letter.  Thankfully, email was just getting started and we still resorted to snail-mail (which is today a great idea for weighty matters).  I laid it out to her, told her that she was the kind of woman I hoped to marry, and asked her to pray as to whether or not there could be a future between the two of us.  I sent her the letter in the fall of the year and waited.

Weeks and months rolled along, and before long it was January of 1997.  After taking a semester off from school, I moved back to Louisville, Kentucky, to re-enroll in seminary.  The first day in my dorm room, I asked the Lord to give me a word from the Scriptures to cling to in the coming weeks, one that would be a milepost for that new season of life.  On January 4, I wrote down Isaiah 42:16 in my journal,


I will lead the blind by ways they have not known, along unfamiliar paths I will guide them; I will turn the darkness into light before them and make the rough places smooth. These are the things I will do;I will not forsake them.


For three weeks I memorized and meditated on that promise, trusting God to do those things for me.  The weekend of January 26, I visited my uncle and his family in Cincinnati, Ohio.  On Sunday morning, when I walked into the Sunday School room at their church, I immediately noticed a bright orange banner along the wall with Isaiah 50:7 painted across:

Because the Sovereign Lord helps me,I will not be disgraced. Therefore have I set my face like flint, and I know I will not be put to shame. 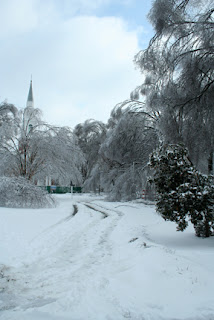 The Lord put a check in my spirit at that moment.  A check is when the Holy Spirit alerts you on the inside as if to say, "Listen up.  I am speaking.  I have something for you here."  I made a mental note of the Bible verse and wrote it down.

That night I drove back to Louisville, pondering those two verses as I drove.  Isaiah 42:16 was a promise of divine guidance.  In other words, "I can trust my steps to Him."  The other verse in Isaiah, however, was a promise of not being put to shame.  I internalized that as, "God will not shame me.  I don't have to be afraid.  He has my best interests at heart."

Arriving on campus, I checked my campus mailbox.  Inside was a note from the girl I had written in the fall.  As I walked across the chilly campus to Whitsitt Hall, I prayed, Lord, whatever this holds, I commit the outcome to you.  Sitting down on my blue love seat in the small dorm room, I read the letter.  She kindly and respectfully turned me down and told me that she did not think we had a future together.  She also told me, "Since I received your letter in the fall, I have been praying two Bible verses for you: Isaiah 42:16 and Isaiah 50:7."

I was stunned.  The refusal from the young lady really did not phase me.  It was one of those moments when you feel, "Well, this is not what is best for me, so thank God."  The reality, however, of how the Lord spoke to me through those specific verses overwhelmed me.  I later learned that such an experience is what Robert Clinton calls a "double word confirmation" in his book The Making of a Leader.

Taking my Bible, I walked across campus to a grassy hill that looks out at the library.  Time seemed to stand still as I sensed I was in God's presence.  Submitting my life to Him afresh, I asked Him to have His way with me in the coming days.

That was Sunday night.


It was one of the defining moments in my life.

On Friday night, I met the woman of my dreams - the one I would marry.

Tracey Funderburk moved to the campus of The Southern Baptist Theological Seminary that very week.  Not knowing why she needed to enroll at the school but sensing the Lord's direction to move to SBTS, she moved 500 miles from Lancaster, South Carolina.  We met that Friday night at a music school party.

Immediately prior to leaving my dorm room for the party, I stretched out on the floor with my Bible and journal, asking the Lord to direct my steps.  I wrote, 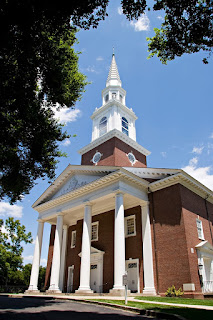 Whatever is in the future, in the days ahead, Lord I trust you.  I want to abide in you and let you do through me whatever you want.  To lead along new paths.  Guide in ways I have not known.  But you know it thoroughly, Father.  So I am yours.  I give myself to your love.  "I walk into the unknown trusting as a child."

Two hours later, I returned to my small dormitory and penned, I met a girl tonight - a new student.  She went to North Greenville University and worked at Crossway Book Store.  Tracey Funderburk.  Wow.  Psalm 37:4

Twelve months later I asked her to marry me in the steeple of Alumni Chapel on that campus one cold winter night.  Six months later we were married one hot July afternoon.

And seventeen years and three children later, the rest is history.
Posted by Rhett Wilson at 10:00 AM