On my shelf sit some books in a series called “Perspectives.”  Each book takes a topic in Christian theology and presents four different views on subjects like church government, the baptism of the Holy Spirit, the end times, the Sabbath,  and the Lord’s Supper.  One of the things I learned through the years is the reality that sincere Christians who take the Bible seriously come to different conclusions about its teachings.  It’s amazing that you can take, say Adrian Rogers and John MacArthur, or Charles Swindoll and Jack Hayford, or John Piper and Johnny Hunt, men who spent decades studying the Bible, and they come to different conclusions about important topics.  I think that does magnify the grace of God and how he relates to us according to our measure of faith.

Like many doctrines where serious Christians disagree, I believe God has an amazing measure of grace and that he meets us right where we believe Him.  After decades of being serious Christians, carefully studying the Bible, pastoring churches,  and receiving international recognition, John Piper and Johnny Hunt would disagree over some important doctrines like the doctrine of election and the practice of baptism.  Such is the grace of God. 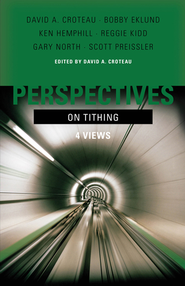 One area that evangelical Christians disagreed on is in what exactly the Bible teaches about biblical stewardship.  Some teach the idea of "storehouse tithing," primarily based on Malachi 3.  Others do not believe that “storehouse tithing”  is a biblical concept for New Testament Christians.  The biggest argument for the latter conviction, I believe, is the reality that storehouse tithing is never taught in the New Testament.  It is never mentioned in the main body of NT teaching on monetary stewardship, Paul's two chapters in the middle of 2 Corinthians.
Several years ago, as I was re-studying biblical stewardship, I came across one of the “Perspectives” books on the subject called "Perspectives on Tithing: Four Views."  In it I was surprised to find that both John MacArthur and Charles Ryrie come to the same conclusions as do I on the subject.  The two study Bibles that I use regularly are the MacArthur Study Bible and the Ryrie Study Bible.  I have used the first for about twenty years and the second for ten.
That revelation led me to digging deeply into John MacArthur’s teachings on stewardship.  MacArthur is one of the most respected pastor-theologians in the evangelical world today.  Known for taking the Bible very seriously, he works hard at trying to teach exactly what he believes the Scriptures say, and he has written many commentaries on books of the Bible.  His tag line on his website is "unleashing God's truth, one verse at a time." 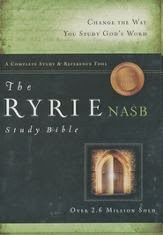 His teaching on stewardship disagrees with “storehouse tithing” teaching which became popular in America in the late 1800’s due to the publication of two books about tithing in 1873 as well as the ministry of Thomas Kane, who popularized the concept of tithing in America.  Before then, according to David Croeteau, it was "virtually nonexistent in the American church."

I believe that MacArthur hits the nail on the head and "rightly divides the Word of truth" with his interpretation of biblical stewardship.  He thoroughly  goes through the biblical accounts of stewardship, including OT passages regarding tithes and taxes and the paramount New Testament passage on monetary giving – 2 Corinthians 8 and 9.  With much detail he explores what is meant in the Old Testament by tithes and taxes versus the NT pattern of giving.  And he shows how it is incorrect to use the Malachi 3 passage as a clear exhortation for NT believers today.
The following quotations summarize MacArthur’s biblical interpretation on the issue . . . 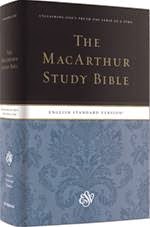 God's pattern for giving is not tithing in the New Testament. It isn't even tithing in the Old Testament. It never has been tithing, it never will be tithing.
The right thing to do in the area of giving is to teach the truths of the Word of God and then leave it to the Spirit of God to generate the response along with all the rest of the fruits of spirituality. And so we teach the Word of God. We don't use gimmicks, we don't use programs, we just teach the Word of God assuming the Spirit of God will produce in the lives the kind of giving commensurate with the kind of life.
And you remember I told you that there is no prescription in the Bible for what percentage we are to give. There is no prescription in the Bible for what amount we are to give. We are to give proportionate to what we have, we are to give with a measure of sacrifice, and we are to give voluntarily. That's what we call free-will giving.
No Jew gave ten percent. He gave ten percent, ten percent, and ten percent every third year plus. So if you're talking about tithing, you're talking about that amount and you're talking about the funding for the national government. You're talking about supporting the theocracy, that was taxation.
Now let me say at this point just by way of a footnote. I know that this is new to some of you who perhaps were raised in a church or been in a church where they hammered on tithing and they said that the way Christians are to give is to give ten percent because that's the way the Jews give. I know that that is something that is taught commonly. That is not what the Bible teaches. The Bible does not teach the Jews gave ten percent. As I pointed out it teaches that they gave about 25 percent. It was not their giving to God, it was their payment to the theocracy, to the government. It had to be brought into the temple treasury and not to bring it was to rob God, according to Malachi 3:8, of His due tithes and offerings. That was taxation. I know that that is perhaps new to some of you but that is clearly what the Scripture teaches. It's what I've taught for many, many, many years, we just haven't been able to cover it recently. But it is clearly what the Scripture teaches as you saw last time.
So the amount is up to you. Whatever you purpose in your heart, whatever you desire to give, whatever you want to give voluntarily, generously, sacrificially, proportionately, that's the way you give. Now let's sum it up. The giving of the Macedonians was initiated by grace, transcended difficult circumstances, was with joy, not hindered by poverty, generous, proportionate, sacrificial and voluntary...that is the way we are to give.
All giving apart from that required to run the government was purely voluntary (cf. Exodus 25:2; 1 Chronicles 29:9). Each person gave whatever was in his heart to give; no percentage or amount was specified.
New Testament believers are never commanded to tithe. Matthew 22:15-22 and Romans 13:1-7 tell us about the only required giving in the church age, which is the paying of taxes to the government. Interestingly enough, we in America presently pay between 20 and 30 percent of our income to the government--a figure very similar to the requirement under the theocracy of Israel.
The guideline for our giving to God and His work is found in 2 Corinthians 9:6-7: "Now this I say, he who sows sparingly shall also reap sparingly; and he who sows bountifully shall also reap bountifully. Let each one do just as he has purposed in his heart; not grudgingly or under compulsion; for God loves a cheerful giver."
Giving is to demonstrate love and not law.  2 Corinthians 8, I'm going to skip along a little bit here. Look at 2 Corinthians 8:8 and 9. Love, not law, not a system of law that you're under. "I speak not by commandments." Now did you get that? This is not a legal system. This is not a prescription for percentage. "I speak not by commandments, but by occasion of the earnestness of others and to prove the sincerity of your," what, "of your love.
I'm telling you all this information about giving which dominates this chapter, "not by way of a command, but simply as a test of your love." Oh that's good isn't it? Giving is a test of your love. "For you know the grace of our Lord Jesus Christ that though He was rich for your sakes He became poor that you through His poverty might be rich." You know the pattern. You know the example love gives everything.
I am not giving you a commandment. I am not degenerating this whole thing into legalism. I am telling you prove your love, demonstrate your love. Look at verse 12. "For if there be first a willing mind," Paul says, he's talking about giving. All God wants is a willing mind. Someone who wants to give. Verse 7 of Chapter 9, "Every man according as he purposes in his own heart so let him give."
It is to demonstrate love, not grudgingly, not necessity, not legalism, but love. And when you put a prescription on a giving, you give people a law to abide by rather than love and you've robbed them.

The above quotations came from several of Pastor John MacArthur's sermons on the subject of biblical stewardship, including the following:

The model for New Testament giving is not percentages.  The model, instead, calls for consistent, sacrificial giving, decided upon between the individual believer and the Lord.  We often call that "grace-giving" or "free-will giving."  That is monetary giving according to the New Testament.