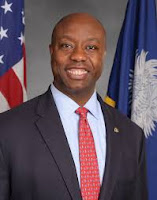 reform legislation since 2015, following the killing of Walter Scott, a black man shot in the back by a white police officer in Sen. Scott’s hometown of North Charleston. The first African American senator from a Southern state since 1881, Scott convinced President Trump to include Opportunity Zones for distressed communities as part of the 2017 tax reform law. He recently spoke to Decision about the racial and political unrest in cities like Atlanta, Seattle and Portland in the weeks following the killing of George Floyd; his vision for police reform that builds public trust while preserving a strong police presence; and the importance of the Christian witness in addressing racial justice issues.

Q: First of all, how does your Christian faith shape your view of what law enforcement should be?

Through the lens of Romans 13, law enforcement officers should be character-driven people who seek to serve someone and something—country, city, community—above themselves. When that happens, we get a different outcome. And frankly, as we pursue that level of righteousness in law enforcement and in institutions of authority to include elected officials, I think we should expect that they are going to see their responsibility and the people whom they serve as a part of their calling.