The Ten Commandments and American Law

The Ten Commandments are an essential part of the foundation for American law!
Posted by Rhett Wilson at 8:55 PM No comments:

Email ThisBlogThis!Share to TwitterShare to FacebookShare to Pinterest
Labels: Heritage of the United States of America, Law and Liberty

The Mission for 21st Century Conservatism

In a series of speeches to lawmakers, Newt Gingrich makes the case that it is not enough for the conservative movement to simply reject the failed policies and institutions of the Left. Instead, we must develop replacement models that deliver better results at lower costs with greater freedom.

Read Moving from Rejection to Replacement: The Mission For 21st Century Conservatism.
Posted by Rhett Wilson at 8:27 PM No comments: 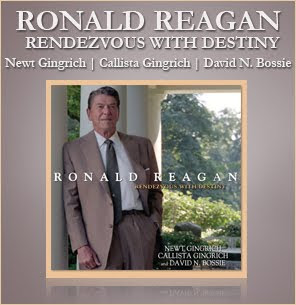 I don't know about you, but my thoughts keep thinking ahead to the fall of 2012. I am watching with anticipation these days to see who will actually put their names in the hat to challenge President Obama for the Presidency of the United States.

This weekend my children and I watched an excellent documentary on the life and presidency of Ronald W. Reagan entitled Ronald Reagan: Rendezvous with Destiny. Hosted by Newt and Callista Gingrich and produced with Citzens United, the DVD tells the story of his life and the three pillars that shaped his time in office: reviving the American economy, restoring America's spirit, and challenging the oppression of the Soviet Union. One quality that stood out was Reagan's frankness and truth-telling. He said what he meant without allowing public opinion to sway his stance. It was a good opportunity to talk with my oldest son about standing firm and not being a people-pleaser.

I have also begun reading Mike Huckabee's newest book (which reads an awful lot like a running platform!), A Simple Government. Huckabee's straight-talk, down-to-earth, no fluff style is refreshing and appealing.

Did you know that Huckabee, while a Southern Baptist pastor, sensed a divine call into politics while studying the much-acclaimed Experiencing God: Knowing and Doing the Will of God by Henry Blackaby? The book has been a catalyst in the lives of a multitude of Christians, selling several million copies worldwide.

God cares about politics. So should we.
Posted by Rhett Wilson at 11:08 PM No comments:

Email ThisBlogThis!Share to TwitterShare to FacebookShare to Pinterest
Labels: Conservative Thoughts, Hope for the United States of America, Political Commentaries

Roles in a Toxic Church

What are the different roles in an abusive church or system? Arterburn and Felton explain the five types of people in a toxic-faith system: the religious persecutor, the religious co-conspirator, the religious enabler, the victim, and the outcast. The persecutor, usually the pastor in an abusive church, feels an excessive need to be in control. Self-centered, narcissistic, and compulsive, he creates an environment aimed at protecting his self-interests, distancing himself from true accountability and intimacy, and lacking genuine integrity.

The co-conspirators, driven as well by the need to conquer, are the most dangerous followers whose goal is to make the persecutor look good. They are the caretakers of the entire system, staying close to the persecutor; their role is to protect the leader’s image. This person or persons will be the heavy, or sometimes colloquially called “the hammer,” in carrying out the desires of the persecutor; often it is the co-conspirator who organizes the other followers for polarization, mobilization, and labeling. Because of his proximity to the persecutor, he often gains the trust of other followers. Wayne Oates calls the co-conspirators the “palace guard.” According to Oates, in “order to stay in power and on top, they [the persecutors] surround themselves with a palace guard that protects them from and informs them about those whom they distrust.”[1]

The enablers, unlike the co-conspirators, are driven to survive, not conquer. Instead of rocking the boat, they give blind adherence to the system and its leaders. It is almost impossible for these people, usually good people, to embrace the notion that the establishment could be wrong. The enablers carry out the dirty work of the persecutor and co-conspirator, have the primary goal of maintaining peace and the status quo, and turn a deaf ear to criticism of the system. Much like enablers in the dysfunctional family system of an alcoholic, they overlook the wrongs done and support the leadership, unable to bring themselves to leave or dismantle the system in order to do what is right.
The fourth role in an abusive system is that of the victim. These people are compliant, blindly supporting the leadership and never rocking the boat. They may go to great personal sacrifice in order to support the pastor and church. Because of a deep need to be valuable to and a part of the system, they will easily play into the hands of the persecutors and co-conspirators, who manipulate and exploit them. The persecutors and co-conspirators will use manipulation and threats to silence the victims and keep their victimization a secret if necessary. If the victims ever discover the system is abusive, they feel a great sense of betrayal and disillusionment.

The final role in the abusive church is that of the outcast, who refuses to play the dysfunctional games, becoming one of the lone voices crying out for change – change that “will not come as long as the persecutor dictates power, the co-conspirators manipulate the system, the enablers allow it to continue, and the victims fall in line with blind faith. When outcasts surface, they are identified as troublemakers and pushed out of the system as soon as possible.”[2] The outcasts are unimpressed by position or title; they see through the delusion and are willing to suffer great personal loss in order to make a stand and leave the system. Unfortunately, these outcasts will be discredited by the leadership immediately through the process called labeling. [3] Even if they are long-time supporters of the church, the leadership will be glad to see them leave.
[1] Wayne Oates, Behind the Masks: Personality Disorders in Religious Behavior (Louisville, KY:
The Westminster Press, 1987), 62.