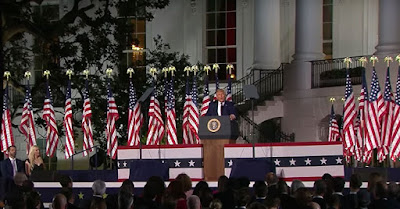 "At no time before have voters faced a clearer choice between two parties, two visions, two philosophies or two agendas... This election will decide whether we will defend the American dream or whether we allow a socialist agenda to demolish our cherished destiny."

As he's done since day one, President Trump vowed to "uphold your religious liberty" -- a fact no American doubts after the sincerity he and his administration have shown on our First Freedom here and abroad. But don't expect that same commitment under Obama's vice president, he warned. Despite all the tire-pumping on the former VP's Catholic roots, his party couldn't keep the act up long enough to even recite the Pledge of Allegiance. "During the Democrat convention, the words 'under God' were removed from the Pledge... Not once, but twice. We will never do that. But the fact is, this is where they are coming from. Like it or not, this is where they are coming from."

Under Biden, freedom isn't safe, the president insisted, and neither are families. While rioters harassed people outside the White House gates, the president underscored the point: "If you give power to Joe Biden, the radical left will defund police departments all across America... They will make every city look like Democrat-run Portland, Oregon." The message of 2020, Michael Doughtery writes, unlike so many other years, "is that the threat to America comes from within..."