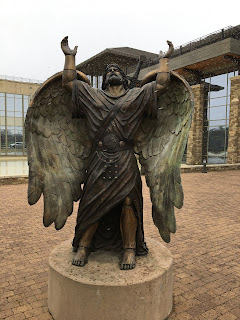 "We have, in our recent pandemic, lived through what many on the legal, political and cultural Left envision as religious freedom, but often downgrade to "the right to worship": stay in your homes, worship in a virtual environment and don't let your religion outside and certainly not into your workplace, lest you infect the rest of us. That has rightly chafed many Americans. They understand that religious freedom is something more: that one's duty to the Divine is not something granted by government and, therefore, not something permissibly taken by it, either.

Rather, it is a freedom attached to our humanity. It is a right meant not merely to permit religious worship, but for it to be exercised. It is a liberty not only to hold one's convictions and conscience, but to speak about them publicly and to live them out freely. It is a sacred human benefit to be fought for—and protected by neighbor, elected official and jurist alike.

Religious freedom is not the default experience for human history. It will not protect itself against the siege laid at its gates. That duty falls to you and me."

Read the entire article here by Kelly Shackelford at Newsweek.