COLUMBIA — "Dozens of South Carolina legislators are calling on Gov. Nikki Haley and Attorney General Alan Wilson to join 11 other states that have sued the federal government over an Obama administration directive on transgender students and bathrooms. 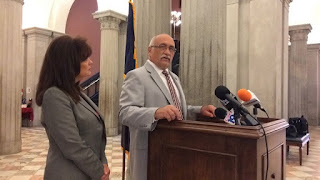 Rep. Mike Pitts, R-Laurens, said his issue is not over the expansion of bathroom usage to the transgender community, but over the federal government’s intervention on issues that should be left to individual states to decide.

'I don’t necessarily think the transgender issue is an issue in South Carolina because I trust our school boards to deal with it,' Pitts said in a news conference Thursday."

Read the entire article here by Cynthia Rolden.
Posted by Rhett Wilson at 7:00 AM