Will Graham Shares Hope on Indian Reservation in South Dakota 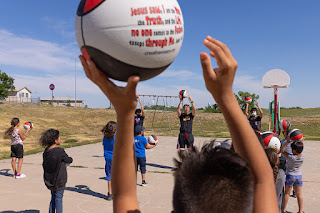 "Among those who responded was an elderly lady, sitting quietly off to the side. As she visited with a counselor, who shared more about how to grow in her newfound relationship with Jesus, her adult son Jonathan offered his story.

Born in 1960, Jonathan was just eight years old when his mother—the woman who was now accepting Christ as her Savior—gave him his first can of beer. He quickly devolved into alcoholism, and by 12 attempted to commit suicide for the first time. Jonathan realized at the last second that he didn’t want to die and did his best to hold himself up by his toes as the noose tightened around his neck, but it was too late. He passed out, and came to at some point later in the back of a cop car.

His painful journey was only beginning: another adolescent suicide attempt, two accidents (one with a tractor and one with a truck) that nearly claimed his life, a broken marriage, and decades of alcoholism that resulted in three stints in jail for DUIs. Anger from his childhood bubbled up into raging fistfights that left him with a scarred face.

'1986 is when somebody came up and preached Jesus Christ to me, but I didn’t know Him. I really didn’t know Him. I just played the game. I didn’t read the Bible or nothing,” said Jonathan, who then shared that during his second visit to prison (in 2000), he read the entire Bible. He knew he had to change, and God was working on his heart, but alcohol still owned him.

God broke the chains of addiction in Jonathan’s life, as Jonathan went on to read the Bible two more times during his final incarceration. He has been a faithful student of God’s Word ever since.

'I know for a fact that I’m walking with God and I’m walking in His Word. Sometimes, I might drift off a little bit, but I know I have to pray and get back on track,' Jonathan said. 'Spending time in the Word gives me the faith and strength and courage to stand strong.'

Jonathan’s mother—a Lakota traditionalist—quickly noticed the change in her son.

'I’ve been talking with my mom, ever since I’ve become a Christian. I’ve been telling her what I’m doing,' said Jonathan. 'Ever since I got out of prison, she’s noticed a change in me. She noticed the people I was hanging around with were Christians. She knows that there was something positive there.'

Years after Jonathan’s salvation story, his mom came at his invitation to hear Will Graham this week, and Jonathan couldn’t contain his joy."