Symptoms of a Disorganized Life


"Pay careful attention, then, to how you walk—not as unwise people but as wise— making the most of the time." - Ephesians 5:15-16 (HCSB)

Several thousand books have come through my library the past twenty-five years. Some stayed. Others found another life via Goodwill. A few helped change my life.


One of those in the latter category is Gordon MacDonald's Ordering Your Private World.

MacDonald shares his experience of being a young pastor with lots of talent and a great personality. For most of his latter twenties he rode the wave of those two assets, while ignoring the guardrails of habitual disciplines in his life. 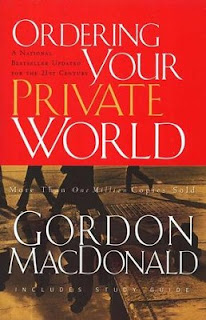 After hitting an emotional-mental wall one day, he was struck head-on with a sobering reality - he could not coast the rest of his life and ministry on what had made him attractive and outwardly successful in his twenties. His gifts and natural charm would not enable him to be successful over the long haul of life.

He had to learn discipline.

MacDonald writes, "There came a time in my own life when I wanted to make sound decisions about the budgeting of my time, and I wanted to be free of that frantic pitch of daily life in which one is always playing catch-up."

He learned nine symptoms of disorganization that characterize his life when disorder rules:

1.  My desk takes on a cluttered appearance.
2.  The symptoms tend to show themselves in the condition of my car.

3.  I become aware of a diminuition in my self-esteem.
4.  There are a series of forgotten appointments, messages to which I failed to respond, and deadlines I have begun to miss.
5.  I tend to invest my energies in unproductive tasks.
6.  Disorganized people feel poorly about their work.
7.  Disorganized Christians rarely enjoy intimacy with God.
8.  The quality of my personal relationships usually reveals it. I may become irritable.
9. When we are disorganized in our control of time, we don’t like ourselves, our jobs, or much else about our worlds.

The freshman year of college is a big learning curve in knowing how to be disciplined and organize yourself and your schedule. With all of the new freedoms, a lot of freshmen either get way too overcommitted in activities and social engagements, or they seem to major in vegging and hanging out!

Dr. Jack Presseau, my freshman adviser, shared a nugget of wisdom with me that remains with me today. He gave a chart to me and for one week had me write down what I did every 1/2 hour of every day. It made me begin thinking in terms of time management and learn as to start seeing my time in terms of short segments. Since then I've learned to think of an hour as 4 segments of 15 minutes, and many tasks can be completed in a fifteen minute segment! It was also a good excercise to begin appreciating the power keeping tasks and appointments written down. As Adrian Rogers said, "The weakest pen is greater than the strongest mind."

That first year of college I also came across an article in Discipleship Journal magazine based on Charles Hummel's book The Tyranny of the Urgent.  I read that article over and over, digesting the concept that the use of our time will always include two conflicting needs fighting to become our master. Those two conflicts are important things versus urgent things.

The disciplined person learns to get important things done.

The undisciplined person is always a slave to urgent matters.

Gordon MacDonald wrote his book, Ordering Your Private World, to help people in the late twenties / early thirties decade learn the necessity of bringing order to the private life in order to succeed long-term in the things that matter - not just those things that bring immediate pleasure, approval, or reward.

Patrick Morley says habits help us organize our lives. Find a successful person in any field - not just a one-hit wonder - but a succeeder over many years - and you will find a life with good habits.

Macdonald writes, "Time must be budgeted!  We must resolve to seize control of our time.  The disorganized person must have a budgeting perspective of time."

In his chapter on time management, he shares 4 laws about unmanaged time.

Law #2:          Unmanaged time comes under the influence of dominant people in my world.

Law #3:          Unmanaged time surrenders to the demands of all emergencies.


The struggle of wisely investing our time knows no age limit. I recommend MacDonald's book to anyone.  I read it again every 2-3 years. But I especially commend it to anyone age
25-35.

May we heed the warning of Hummel, who said, “Your greatest danger is letting the urgent things crowd out the important.”