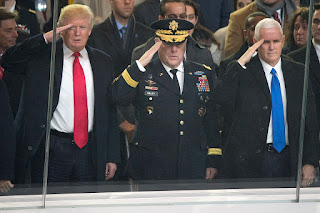 "Joined on stage by Vice President Mike Pence, U.S. Ambassador to the United Nations Kelly Craft, Secretary of State Mike Pompeo and U.N. Secretary-General António Guterres, the President declared that his administration would dedicate $25 million to “protect religious freedom, religious sites and relics.” He also announced that the U.S. will be “forming a coalition of U.S. businesses for the protection of religious freedom.”

“The United States is founded on the principle that our rights do not come from government, they come from God,” said Trump. “This immortal truth is proclaimed in our Declaration of Independence and enshrined in the First Amendment to our Constitution’s Bill of Rights. Our founders understood that no right is more fundamental to a peaceful, prosperous and virtuous society than the right to follow one’s religious convictions.”

While Americans are free to practice their faith, religious freedom is not a universal privilege, Trump reminded the audience. In fact, approximately 80% of the world’s population lives in religiously restrictive environments, according to the Pew Research Center."