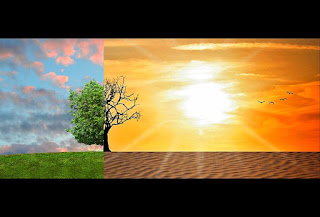 "A collection of headlines from around the world was released titled, “Wrong Again: 50 Years of Failed Eco-pocalyptic Predictions.” Since the 1960s, scientists and government leaders have been warning of catastrophic environmental failure, largely due to climate change. But their predictions don’t come true! . . .

Yes, there are genuine and important environmental issues going on around us right now. As God’s stewards who have been given dominion over creation, there are things we should be concerned about, and we should strive to change so creation can continue to be used for our good and God’s glory. But we should be doing so with a proper perspective, not with climate-change hysteria.

Such hysteria has really resulted from generations of young people not being taught how to think and being brainwashed in secular philosophy!"


Picture used by permission from Pixabay.
Posted by Rhett Wilson at 9:33 AM