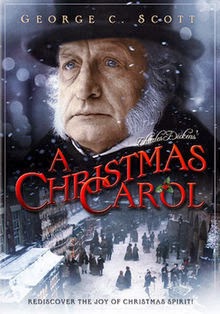 The story challenges us all, will we live self-absorbed lives or will we live our lives loving and serving others?

Ebenezer was a man very rich according to the world’s standards of money, business, and commerce.  A self-absorbed man.  A man with a shriveled, cold heart.  A miserable, pitiful wretch of a man.  A man who did not seem to enjoy the world, its people, and its pleasures around him.  But also a man who changed in the latter years of his life and became a totally different person.

Many people do not realize, though, that Dicken's original story is one of Christian conversion..  A miserly, self-ruled man who submits himself to the Christ of Christmas.  Replete with biblical-Christian language and references (which are ignored in our modern and secular retellings of the story), Ebenezer comes to know His Creator in a real way, and the One born in a manger changes his life.  (Why did I walk through crowds of fellow-beings with my eyes turned down, and never raise them to that blessed Star which led the Wise Men to a poor abode?  - Jacob Marley)  Scrooge spends the rest of his life making amends to those he has wronged, spreading goodwill and compassion, and keeping Christmas every day in his heart.
Ebenezer, though late in life, allowed God to forgive him, change him, and use him.  A man who became a source of goodwill, selflessness, and generosity to many others.  And his eternity secured by the Babe of Bethlehem, enjoying His Presence, goodness, and blessings.
Posted by Rhett Wilson at 11:14 AM