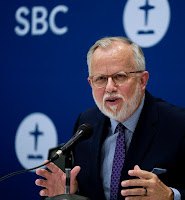 More than 15,000 Southern Baptists gathered in Nashville Tuesday to elect a new president of the Southern Baptist Convention. Ed Litton, a little-known pastor of Redemption Church in Saraland, Ala., was the surprise winner, edging prime contender and Georgia pastor Mike Stone by 556 votes in a runoff. Southern Baptist Theological Seminary President Albert Mohler Jr. (a WORLD board member), also considered a serious contender, got about a quarter of the votes in the first round. Randy Adams, a state convention leader who ran on reformist ideas, received under 5 percent of the votes.

WORLD got the first sit-down interview with Litton on Thursday.

Congratulations. How do you feel? I’m overwhelmed and quite humbled. We’re at a really important moment in our history. And I think this convention has moved in a very clear direction.