Grace in a Billfold


LOVE IT. ESPECIALLY FOR THE SOCIAL MEDIA AGE. 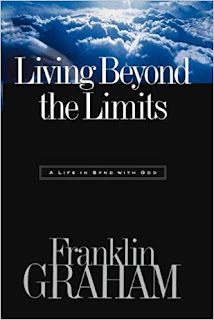 I love his story of how he and his family reached out to “fallen” Jim Baker in the 1980’s during and after his prison sentence. They threw no stones but reached out in love and grace – even though some of his theology and methodology differed from their own.

Franklin visited Jim several times in prison, and when Baker got out they invited him to attend church with them and sit beside Ruth. They invited him to their house for Sunday dinner and discovered he only had an envelope for a wallet, Ruth Graham gave Baker one of Billy’s wallets. Franklin writes, “He was visibly shaken. A fallen minister, convicted of financial wrongdoing, was being handed Billy Graham’s billfold! To this day, he still carries that wallet. I saw him pull it out during a recent interview.”

Graham continues, “Man’s way is to expose, to sell a lot of magazines, to boost circulation. Who cares that success comes at someone else’s expense?
When someone’s sin is uncovered, what are we to do? Call the Associated Press? Sell the story? Send it to a Christian magazine?

None of that. We are called to love and forgive the fallen. 1 Corinthians 13:5 says, ‘Love keeps no record of wrongs.’

This sin of gossiping has been around the church for a long time. Back in the sixth century, a monk named John Climacus chastised those he called ‘accountants of other people’s faults.’

I don’t mean to imply that we should be soft on sin. The Bible clearly states that sin should be confronted privately and in love.

A.B. Simpson said, ‘I would rather play with forked lightning . . . than speak a reckless word against any servant of Christ, or idly repeat the slanderous darts which thousands of Christians are hurling on others, to the hurt of their own souls and bodies.’

God will sort out everything when we get to heaven, so we can put away our knives.”