Truth Came to Us At Christmas 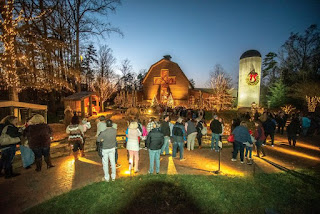 Over 150 law enforcement officers and their spouses recently attended one of these retreats at the Billy Graham Training Center at The Cove in Asheville, North Carolina. In addition to Bible teachers and Christian leaders in law enforcement, chaplains with the Billy Graham Rapid Response Team were there to minister to the unique emotional and spiritual needs of these couples who serve our communities.

At law enforcement appreciation events led by the Billy Graham Rapid Response Team, officers and their spouses step away from the everyday stresses of their fast-paced lives.

“My husband began to talk on the retreat about the shooting that nearly killed him. It is the beginning of his healing,” said one wife of an officer.

Two other guests, Keith and Angela, first attended a retreat two years ago. At that time, their marriage was falling apart, and the stresses from Keith’s job drove him away from the Lord—and kept him emotionally distant from his wife and children.

“I was angry, frustrated, and resentful,” he said. At the first session that week, Keith felt instant freedom hearing the Word of God and listening to worship music: “Every session, I could feel His presence stronger and stronger. I just couldn’t get enough.” Later during the retreat, Keith responded to the Gospel invitation, sobbing on his knees as he came to the Lord in repentance and faith.

Two years later, at this fall’s retreat, Keith shared, “He’s been completely faithful in healing the damage I caused my wife and my children. I can truly say I am a new person because of God. To know that I’ve been given a second chance—not just in my walk with Him but in my marriage—is priceless.”