A Voice from the Past Speaks


A. W. Tozer, prolific author and pastor, influenced countless Christians through his ministry of preaching and writing.  Today, years after his death, his influence remains.  In his book Of God and Men, Tozer shares how badly the "word of wisdom" is needed today in our pulpits. 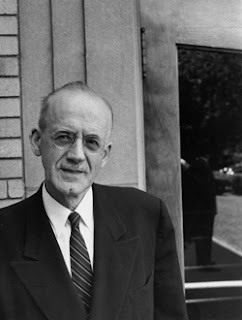 "What God says to His church at any given period depends altogether upon her moral and spiritual condition and upon the spiritual need of the hour.  Religious leaders who continue mechanically to expound the Scriptures without regard to the current religious situation are no better than the scribes and lawyers of Jesus’ day who faithfully parroted the Law without the remotest notion of what was going on around them spiritually.  They fed the same diet to all and seemed wholly unaware that there was such a thing as meat in due season.  The prophets never made that mistake nor wasted their efforts in that manner.  They invariably spoke to the condition of the people of their times.

Today we need prophetic preachers; not preachers of prophecy merely, but preachers with a gift of prophecy.  The word of wisdom is missing.  We need the gift of discernment again in our pulpits.  It is not ability to predict that we need, but the anointed eye, the power of spiritual penetration and interpretation, the ability to appraise the religious scene as viewed from God’s position, and to tell us what is actually going on.

Where is the man who can see through the ticker tape and confetti to discover which way the parade is headed, why it started in the first place, and particularly, who is riding up front in the seat of honor?

The proper, ruler-of-the-synagogue type will never do.  Neither will the priestly type of man who carries out his duties, takes his pay and asks no questions, nor the smooth-talking pastoral type who knows how to make the Christian religion acceptable to everyone.  All these have been tried and found wanting.

Another kind of religious leader must arise among us.  He must be of the old prophetic type, a man who has seen visions of God and has heard a voice from the Throne.  When he comes (and I pray God there will be not one but many) he will stand in flat contradiction to everything our smirking, smooth civilization holds dear.  He will contradict, denounce and protest in the name of God and will earn the hatred and opposition of a large segment of Christendom.  Such a man is likely to be lean, rugged, blunt-spoken and a little bit angry with the world.  He will love Christ and the souls of men to the point of willingness to die for the glory of the one and the salvation of the other.  But he will fear nothing that breaths with mortal breath."