Out with the Old, In with the New!

I wrote the following article a few years ago and am reposting it here . . . 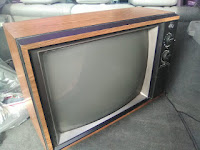 We bought the television from Kmart in Taylors in 1988. Long before flat screens or digital technology, this set included the turn knobs and required the antenna wires to be wrapped around the screws on the back of the tv. I watched many a show on that set while I lived at home. My mother – not one to be abreast of the latest technology – just got rid of this set one month ago. I surprised her with a new flat-screen television in early December, and we unplugged the old set that served our family for thirty years. I left the set at the dump to be released into 1980’s household electronics after-life.

Moving into another year involves letting go of old things and embracing some new ones. For me, the first couple of week of January include getting my mind in gear as I shift from the holidays into the winter of another calendar year.

I love the sights, sounds, routines, and excesses of Christmas. And partly because of my melancholy temperament, I find my spirit somewhat deflated the week or two after Christmas as the decorations go down and the feasting turns into dieting!

I find it helpful to embrace disciplines early in January, turning my mind to prepare for a productive year, and set my spirit to seek the Lord afresh.