The Conversion of Ebenezer Scrooge 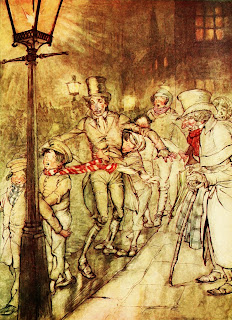 After Christmas last year, I decided that during December this year I would read Charles Dickens’ A Christmas Carol to my family.  Somehow at my age I’ve never actually read the story, though I've enjoyed numerous television and movie takes at the classic Christmas tale.  My favorite is still the 1980s George C. Scott Ebenezer Scrooge.
Dickens’ written tale is, perhaps surprisingly, a blatantly Christian story.  It is a story of a conversion to a Christian worldview (though not as blatant as a modern evangelical gospel tract).  Of course, our Hollywood and Disney takes on the conversion of Ebenezer leave out the Christian details, but it is obvious nonetheless in the book!  Hear Jacob Marley’s lamentation of having a selfish heart when he lived as a human . . .
Why did I walk through crowds of fellow-beings with my eyes turned down, and never raise them to that blessed Star which led the Wise Men to a poor abode?

The story challenges us all, will we live self-absorbed lives or will we live our lives loving and serving others?

Ebenezer was a man very rich according to the world’s standards of money, business, and commerce.  A self-absorbed man.  A man with a shriveled, cold heart.  A miserable, pitiful wretch of a man.  A man who did not seem to enjoy the world, its people, and its pleasures around him.  But also a man who changed in the latter years of his life and became a totally different person. 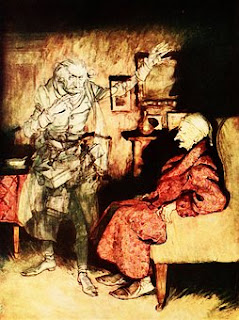 Many people do not realize, though, that Dicken’s original story is one of Christian conversion.  A miserly, self-ruled man who submits himself to the Christ of Christmas.  Replete with biblical-Christian language and references (which are ignored in our modern and secular retellings of the story), Ebenezer comes to know His Creator in a real way, and the One born in a manger changes his life.  Scrooge spends the rest of his life making amends to those he has wronged, spreading goodwill and compassion, and keeping Christmas every day in his heart.

Charles Dickens wrote from a Christian worldview, much like the fiction of C. S. Lewis and J. R. R. Tolkien.  Author Stephen Skelton writes, “Today, too many of us view A Christmas Carol as a secular seasonal story, in the same category as the stories of Rudolph or Frosty. But that’s not where it belongs at all. In the first place, with Charles Dickens, you’re dealing with a self-proclaimed Christian author.  And in the second place, he has infused his story with Christian meaning.  After all, this is the writer who said, ‘I have always striven in my writings to express the veneration for the life and lessons of our Savior…’ ’”

The biblical name Ebenezer means “thus far the Lord has helped us.” Samuel used the name to commemorate a victory God gave His people. The prophet set up a stone – an Ebenezer stone – to remind them of God’s faithfulness. A modern rendering of the hymn Come Thou Fount of Every Blessing includes the line, “Here I raise mine Ebenezer, here by thy great help I’ve come.” 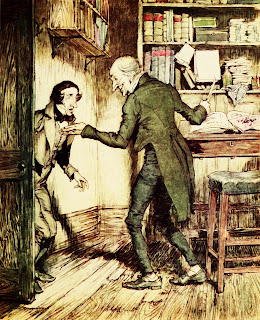 The last use of the name Ebenezer in A Christmas Carol occurs when Scrooge and the Ghost of Christmas Future stand at the neglected stone in a dark graveyard. The gloomy specter points a finger to the lonely marker bearing the name Ebenezer Scrooge. Likely the use of the name Ebenezer was quite intentional by Dickens. Our lives, unredeemed, can be wasted, as was Jacob Marley and Scrooge’s up to that point. If so, they serve as warnings to humanity. But a monument can also be erected through our repentance, belief, love, and service to others that show the power of a transformed life.

Ebenezer, though late in life, allowed God to forgive him, change him, and use him.  A man who became a source of goodwill, selflessness, and generosity to many others.  And his eternity secured by the Babe of Bethlehem, enjoying His Presence, goodness, and blessings.